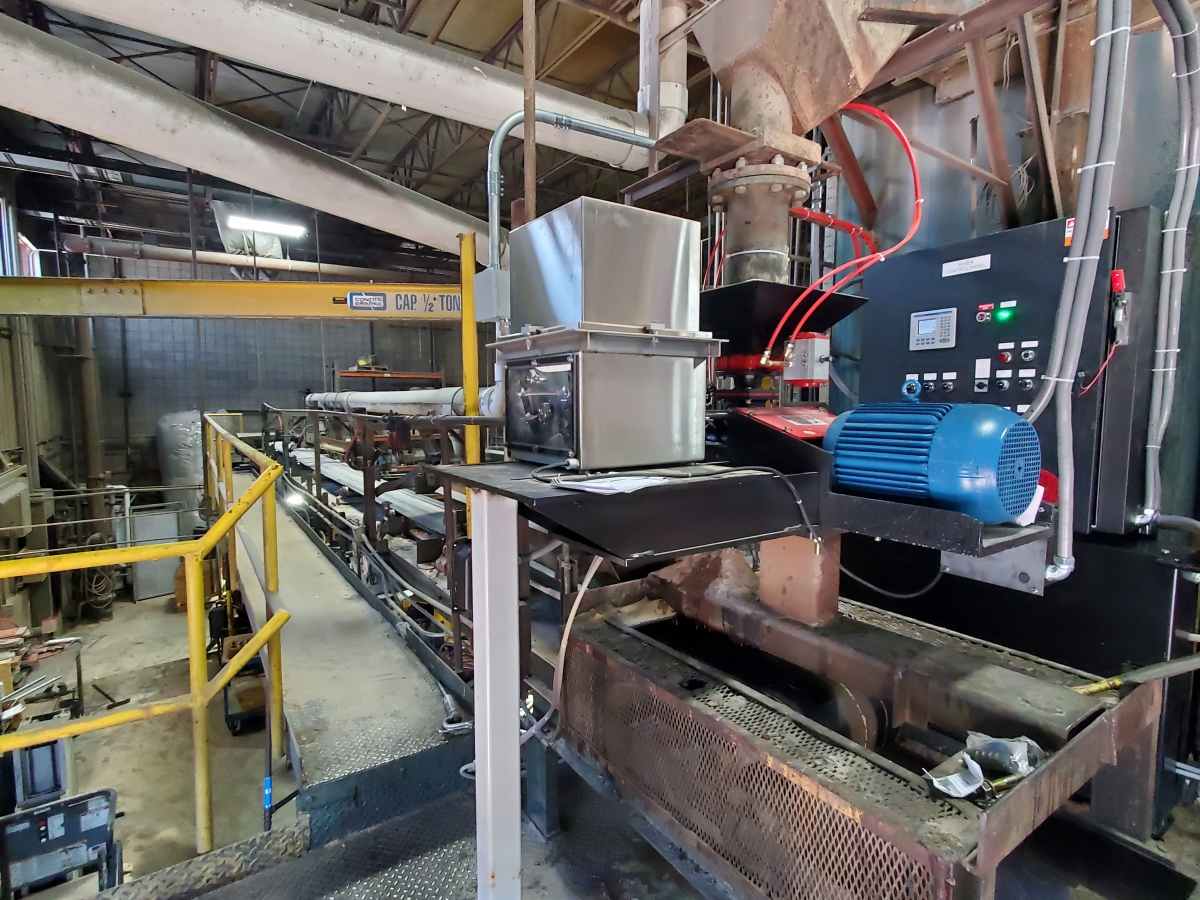 Our customer had a dated mixer that was worn out (circa 1980’s). It leaked sand, had a troublesome pumping system, controls were obsolete, and it was constantly ruining the main shaft bearings.
An addition in the 1990’s had added a belt distribution system to feed sand to multiple core machines based on level sensors in hoppers above the core machines. This belt distribution system had its own control panel separate from the mixer controls.
Another addition at some point, again with a separate control panel, that controlled an elevator sand feed system and a dust collector.
A home-made additive feeder that fed the powder in above the sand gate, which never delivered consistent additions to the sand stream.
Worn-out equipment and the multiple control systems caused a lot of maintenance issues as the communications between multiple control systems caused troubleshooting to be difficult and time consuming.
The customer lacked the maintenance manpower to perform the upgrade on their own.

Design and install a new mixer, pumping system, and additive feeder and combine all control needs into a single panel to remove troubleshooting confusion and to deliver current technology level components.

Del Sol visited the facility to gather dimensions of the mechanical equipment and to collect copies of the schematics for all of the existing control systems.
Del Sol engineered a mixer mount to be able to fit into their layout and utilize the existing mixer mount pedestal.
Del Sol’s controls team compiled all the connections from the existing electrical schematics from three panels and integrated into them into a new single control panel, even using the same wire numbers to allow easy connection to existing wire conduits where able. We used modern controls components to deliver years of sustainability for the system.
After shipment of the hardware, Del Sol’s service team installed the new mixer, controls, and pumping system, connected the new control panel to the existing controls components, core machine level indicators, and sand handling hardware (elevator, belt, plows, etc.).
Del Sol started-up the system, made a few modifications to controls and programming, trained the operators and maintenance staff, and monitored the system for the first couple days of production.

The customer now has new equipment, built with modern componentry, with a simplified control panel to allow much simpler operation and maintenance.
Their new additive feeder delivers the powder below the sand gate into the moving sand stream, allowing for a consistent powder addition.

What the customer had to say:

“I must compliment Rich and his crew for the dedication and follow through in getting us up and going. Rich and the crew worked through a couple of really warm days and made the installation happen. Bringing in the programmer (over the weekend) to iron out some of the control details, was outstanding effort. The effort and follow through demonstrated by your crew was outstanding and in my opinion, rather rare these days.”